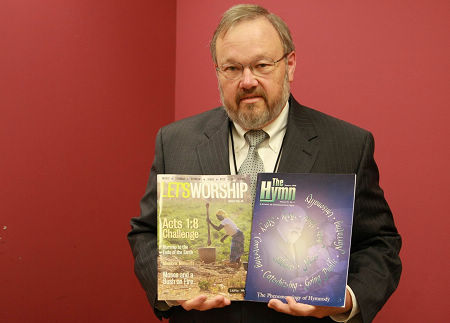 Jubilee College of Music Dean Dr Merril Smoak's most recent hymnological writings can be seen in the Summer 2008 edition of The HYMN: A JOURNAL OF CONGREGATIONAL SONG, as well as the Winter 2008-2009 issue of Lifeway publishing's periodical "LET'S WORSHIP."

Smoak's article for the HYMN journal, entitled "The Language of 'Jesus, Lover of My Soul':  Charles Wesley's Phrase at the End of the Twentieth Century," "traces the phrase from Wesley's hymn, including its basis in scripture, multiple uses by Wesley and contemporaries, and its use in the twentieth century by CCM artists," according to Beverly Howard, Editor of THE HYMN, the quarterly periodical of The Hymn Society in the United States and Canada.

"Hymns continue to be an important of our contemporary worship", commented Dr. Smoak, who has been a member of The Hymn Society since the 1970's.  "Many of our hymns state the foundational doctrines of our Christian faith."

Smoak instructs the Worship Studies and Ensemble series at JCM, as well as a class on hymnology entitled "The Hymn in Christian Worship."