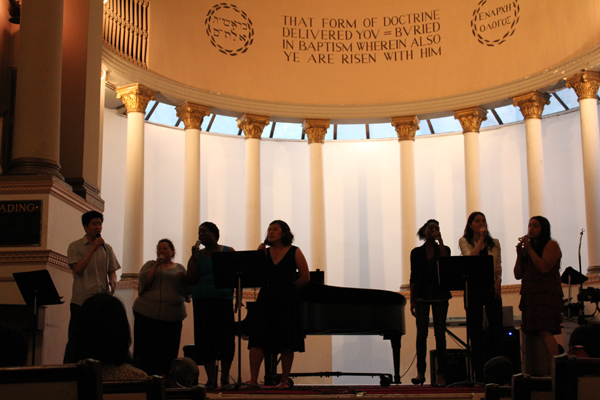 Musicians from the Jubilee College of Music came together to celebrate the Jubilee World's 10th anniversary in New York City.  A precious anniversary concert was held to thank God for his grace upon the ministry.

A diverse group of musicians, including students from the Jubilee College of Music, have been collaborating for the past year in preparation for the anniversary concert.  Talents in vocals, strings, wind, and percussion converged for an evening of music at the First Baptist Church in Manhattan.

The evening’s host along with the church’s deacon welcomed the audience and introduced the Jubilee concert’s agenda. Dr. Paul De Vries, Senior Pastor of Immanuel Community Church in New York, led a special prayer at intermission to cap off the event.

"We are a group of musicians and artists who desire to pursue a life that daily seeks to know God and to make Him known. Music is a just one part of our lives as worshipers.  Our worship does not begin or end in music.  We want to spend our lives, our time, and our gifts on the Lord," said Miriam Chou, Chief Operation Officer for Jubilee World International.

The concert began with a piano solo followed by a series of ensemble and vocal performances.  Other selections in the program included

Alleluja from Exultate Jubilate - W.A.Mozart
Jewel Song from opera Faust - C.Gounod
Anchor For My Soul
Say So
God Of This City
Chasing After You - Paul S. Morton
Everything - Tye Tribbett
Created To Worship - John Lakin

Jubilee is a ministry comprised of a globally diverse and eclectic body of musicians, dancers, actors, and members purposed to glorify God through the sacrifices of praise and worship.

Currently established in over 40 countries, Jubilee utilizes song, dance, and all other forms of expression found within the performing arts and media to sound one loud and unified spiritual trumpet call, proclaiming to all peoples the message of hope, healing and spiritual freedom as found in the Gospel of Jesus Christ.